Suvarnabhumi International Airport (pronounced su-wan-na-poom) is one of the biggest international airports in Southeast Asia, the 21st busiest airport in the world, and the busiest in the country. Opened in 2006, it inherited BKK as its code when the city's former main airport Don Mueang temporarily ceased commercial flights.

The airport is very modern and operations usually run smoothly. Its website has real-time details of arrivals and departures. Despite having just one terminal, it's enormous (the world's fourth largest single terminal building), so when it's time to catch your flight, we recommend arriving the suggested amount of time in advance!

Getting to Bangkok from Suvarnabhumi Airport

The taxi rank is located on floor 1, near the arrivals area. Follow the sign for Public Taxis and ignore touts offering "Official Taxis" in the terminal, they'll overcharge! Make sure your driver agrees to use the meter.

Even simpler and more comfortable is pre-booking a transfer service to pick you up from the airport and take you directly to your hotel. Your driver will wait for you in arrivals with your name on a sign, and you save time and effort trying to find a public taxi.

From these stops, you can reach your accommodation using Bangkok's public transport system, or hop in a taxi or tuk-tuk in the city centre.

Travellers on a strict budget and those wanting the true local experience might want to hop on a local bus from the airport. If this option is for you, hop on the free shuttle bus at Suvarnabhumi, which will take you to the public transport terminal about 2 miles (3 km) away, from which the public buses depart. The most common buses for heading to the city centre are line 551 to BTS Victory Monument station (40 THB (US$ 1.10), frequent from 5 am to 10 pm) and 552 to BTS On Nut (20 THB (US$ 0.60), frequent from 5 am to 10 pm), and from there, you'll probably have to catch another form of public transport or taxi on to your hotel. 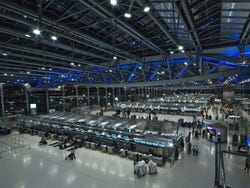 Getting there Don Mueang Airport