Getting to Bangkok from Don Mueang Airport

There are several options to reach the centre of the Thai capital from DMK, suiting a wide range of budgets and time constraints:

Simple and quick, as long as you're happy communicating with drivers, the price depends on where your hotel is located in the city centre. You shouldn't pay more than 350 THB (US$ 9.70), but remember there will be an additional 50 THB (US$ 1.40) airport charge and that passengers pay the cost of any tolls. Taxis wait outside the arrivals halls - make sure your driver uses the meter!

The easiest and fastest way to get to your accommodation, pre-booking a car service to pick you up from Don Mueang Airport means you don't need to stress about finding a taxi and fumbling with your Thai Bahts to pay. Reserve your airport transfer here before you travel.

Cheap and cheerful, there is a train that connects Don Mueang with Hualamphong Train Station which costs no more than 10 THB (US$ 0.30). Trains depart every one to one-and-a-half hours between 4 am and 11:30 am and then roughly once an hour from 2 pm to 9:30 pm.

There are lots of different buses that leave the airport for Bangkok's main sights. Outside arrivals, buses run daily between around 7:30 am and 11:30 pm to the different BTS Skytrain stops and other important spots: bus A1 stops at BTS Mo Chit; A2 stops at BTS Mo Chit and BTS Victory Monument; A3 stops at Pratunam and Lumphini Park; and A4 stops at Th Khao San and Sanam Luang. They depart every half an hour and cost 50 THB (US$ 1.40). 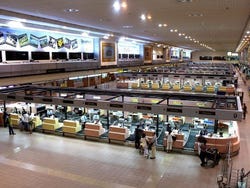 Suvarnabhumi Airport Getting around